If you have taken a look at our recommendations page, then you will already have a good idea as to the type of reputation that we have in Poland when it comes to interior design. Below we are going to take a look at some of the big projects that we have been involved in over the years.

A company in Warsaw wanted its offices to be designed in a way that caters to the flexibility that their staff members are allowed. They wanted a work environment that is somewhere between a work and a leisure space. Nowadays we are spending more time at work than ever before and the borders between working and leisure are being blurred. You can fight against it or adapt, and this company wanted to do the latter.

They wanted offices that were more club like than office like - a place where their employees could go and feel cozy and comfortable while they work. The offices are mostly open plan and the building they are situated in is angular and very graphic, but the company wanted something to contrast this - they wanted a space that was warm and had rich details.

They got in touch with us and gave us an in-depth analysis of what they wanted, and our expert interior designers got to work right away. As you can see from the photo above, we decided that blue would be the main colour that we would use. As we mentioned, they wanted a warm and comfortable environment and blue is a calm, peaceful and gentle colour that can help calm your mind, slow your heart rate, and reduce anxiety.

However, we did not want everything to be blue as this would lead to overkill, so we threw in brown, white, and green furniture as well. When you look at the photo above, we are sure that you will agree with us that it is extremely easy on the eye. They had an office that was not in use and when we asked them what they wanted that room for, they told us it was just a spare that was never used.

They asked us if we had any ideas as to what they could use for it and, as a matter of fact, we did. We told them that they have a number of employees with young children and that we could turn the room into a child friendly area so that parents could leave their children there while they work for a while. Please remember that the staff members have flexible working hours, so they do not need to work eight hours straight. We also recommended that they could hire a qualified nanny so that their employees could work without worrying about what their child is up to. The company loved the idea, so our interior designers turned that unused office into a place where children can have plenty of fun.

A new Israeli restaurant opened in Krakow that serves a variety of plant-based national dishes. The establishment used to be an Asian restaurant before its new owners took over, so it was obviously in need of a complete makeover in order to match the theme of the restaurant. This is where we were called into action.

Under the Asian owners, the walls had been painted in dark green, there were many patterns on them, and the ceiling had been painted black. These dark colours made the space look a lot smaller than it was, so we knew that we had to get as much light inside as possible.

We decided to cover some of the walls in simple white tiles in tribute to the Bauhaus buildings you can find across Tel Aviv. These buildings are actually why Tel Aviv is known as the White City. The surfaces that we did not cover in tiles were painted in a light beige colour. We also added a white curtain as the backdrop to the dining area as this gives the impression of a small room in an open space, making things feel cozy but not claustrophobic.

We left the windows curtain-less so that as much natural light can enter as possible, while we decided that dangling pendant lights were the best choice. These can be switched on in the evening and can even be dimmed to make an intimate ambience. When it comes to tables and chairs, we have used a mixture of furniture that would not look out of place back in Israel. Anyone who walks through the doors now could be forgiven for thinking they have been transported over 4,000km to Israel. 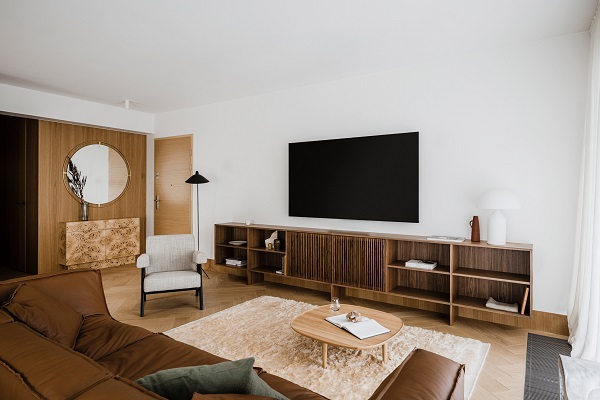 A Tranquil Apartment for Doctors in Poznan

This couple, who are both doctors in Poznan, bought an apartment for a bargain price but there was one main issue - they really did not like the interior. However, the price of the apartment was so good that they still had plenty of their budget left over to hire some interior designers to get their apartment exactly how they want it. They hired us to do that for them.

Since both of them work in a very stressful environment, they wanted a calm environment that they could relax in after a long day at work. We really wanted to give them something that was timeless, which is why we decided to use wooden materials and travertine that age beautifully and do not need to be replaced regularly.

The living and dining room are open-plan, and we decided that wooden chevron floors would be the best flooring to use here. We went for a brown leather sofa in the living room and a coffee table on a lovely rug in front of it. There is a large plasma TV up on the wall that the couple can use to watch Netflix or whatever they enjoy watching.

We put wonderful oak cabinets in the kitchen and slabs of beautiful travertine marble have been used for the breakfast island and the splashback behind the oven. We added a black dining table made from bogwood - we went for black as we wanted it to stand out from the other neutral colours in the room.

The other rooms of the apartment lie beyond some white floor-to-ceiling doors. The same travertine marvel mentioned above was used to create a stunning bathroom. In the master bedroom, our team went for an oak walk-in wardrobe that is covered by a curtain when not in use. What about the flooring? Well, we went for a wood-panels in the hallway and the rest of the house. We are glad to be able to tell you that couple absolutely loved what we did to the place.

A New Online Casino Based in Warsaw

Land-based casinos spend plenty of money on their interiors as the way that the inside of a casino is designed can have a big impact on a player’s behaviour. Believe it or not, but the interior design of a casino can get people to spend more of their money.

Land-based casinos used to have a dark interior, a maze-like layout, low ceilings, and barely any decorative objects. The purpose of such a design was to keep players playing at the casino by keeping them focused on the games and nothing else. This concept was created by Bill Friedman, and while it is not the most humane of approaches, it was something that worked.

However, in the 90s, David Kranes came up with a new way to design the interiors of casinos and it turned Friedman’s concept on its head. Kranes knew that people do not want to spend hours in dark corners. It might be something that works, but it is safe to say that people gambling in a dark casino do not feel happy or comfortable. He came up with the playground design that feels welcoming thanks to decorative objects and natural light. When people are happy, they are also likely to spend more money.

A new online casino based in Warsaw commissioned us to sort out the interior of their website. We used a load of bright colours because they stimulate our brains and better our attention span and short-term memory. Also, if a potential player enters an online gambling site and see black, black, and more black, they will not stay around for long. We believe that these colours are vital for online casinos to be successful.

We also decided to add some micro animations as these add some playfulness to the site and will brighten their mood. As we mentioned above, a happy player will bet more money. We also went for bold text on all the keywords to draw players’ attention to the most important aspects of the online casino. The company was absolutely thrilled with the work we did for them, but the site is not up and running yet, so we cannot give an image at the moment.